We’re proud to be a family owned business connected with the Abel Tasman area for eight generations.
See how the local historical society discovered the story of Meadowbank Homestead.

When John and Lynette Wilson launched their boat service in Abel Tasman National Park in 1977, they continued a legacy of ocean journeys and adventure dating back more than a century.

Our story starts in the mid 1800s with pioneering farmers, sailors and builders, and continues today through our acclaimed adventure company anchored on responsible, sustainable tourism.

For the full story, read the Awaroa Legacy co-authored by Lynette Wilson.

In 1841, the first British fleet, looking for a suitable area to establish a settlement at Te Tau Ihu (the top of the South Island) anchored in the Astrolabe Roadstead, named by French explorer Dumont D'Urville in 1826. John and Lynette Wilson, co-founders of Wilsons Abel Tasman, trace their ancestory back to these first settlers.

From painting by Charles Heaphy 1841 William and Adele's first house at "Little River"
(Awapoto) circa 1863

Nelson pharmacist Frederick Hadfield bought and leased land in the Awaroa estuary for two of his sons, William and Harry.

It took 15 years for the brothers to "break in the land" and build houses. They were then ready to marry and raise families of their own.

William built a house at Little River (Awapoto). This house is still standing, overlooking the land that he farmed. This land, known as the Hadfield Clearing, is now part of the national park estate. Extensive planting and introduction of birds is restoring the farm to native bush.

Adele Snow was the Granddaughter of Nelson's British founding families, the Newths and the Snows.  She married William Hadfield in the same year that his brother, Harry, married Annie Reynolds.

William and Adele's farm was on the Awapoto ("Little River"). Harry and Annie's farm was closer to the coast, beside Venture Creek - now the location of a light aircraft landing strip and the Awaroa Lodge & Cafe.

Adele Snow on her wedding day The Original Meadowbank Homestead circa 1884

Adele felt isolated on their property at Awapoto so convinced William to move closer to Harry and Annie's farm on the coast.

William chose "the finest site in the Bay" to build a house for Adele.

The two families were close, but Annie, died in 1894, soon after the birth of their 10th child. Harry sold up and left the inlet. His farm was sold to two families: The Winters and the Cunliffes.

They established their own farm on the banks of the Awaroa River.

Fred became the unoffical "mayor" of the Awaroa inlet, riding to Totaranui to collect mail for the community. 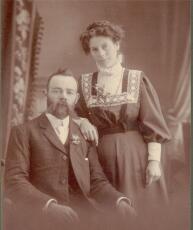